.comment-link {margin-left:.6em;} <$BlogRSDURL$>
the skunks of los feliz
4.05.2006
As you've probably already surmised, Skunks has been placed on hiatus.

Due to a lot of different variables (shepherding my short through post and taking on increased responsibilities at work foremost among them) I haven't had the time to devote to Skunks in order to make it the best blog I possibly can. That said, it's my baby, and I don't want to half-ass it.

Will this hiatus turn into something more permanent? I can't rule that out. After all, what's the natural lifespan of a blog like mine? Do I really want to be writing Skunks a year from now? 2 years? 5?

I do know I've enjoyed every minute of covering Los Feliz and the rest of this crazy sprawl we call home. Thanks to everyone who read Skunks, linked to Skunks, took the time to comment, or dropped an email to me. I tried to report on the types of things I thought you might find interesting.

I hope I succeeded.  ¶ 9:55 PM (12) comments
3.22.2006
Sorry about the irregular posting schedule this week. I'm prepping a short I'll be shooting this weekend, and it's eating up all my time (not to mention my money).

Here's hoping no big news breaks while I'm doing my part to combat runaway production. See you all on Tuesday.  ¶ 11:55 PM (2) comments
3.20.2006
Big news - the GGPNC will be tackling the draft Hollywood Community Plan in a March 29th meeting, in which they will give a general overview of the proposed zoning changes for the Los Feliz area (you can get a preview of the changes here, on this excellent page put together by the Council). This process should be interesting (read: contentious), as the plan contains some proposals that may prove controversial.

- A planned Rapid Bus Line that would run through Los Feliz village via busy Vermont Avenue.
- Increase in height allowances along a U-shaped corrider south of Franklin, described by Vermont, Hillhurst, and Hollywood Blvd.
- The upzoning of Hillhurst north of Franklin. This change would increase height allowances and floor area ratios in order to "allow economic growth".

In other words, it looks like Los Feliz is directly in the cross-hairs of the city's policy of directing high-density development towards areas with "subway station proximity". That's not necessarily a bad thing - in fact, that's pretty good policy. However, the devil is in the details, and it remains to be seen whether that policy can be implemented in a way that protects quality of life, while simultaneously promoting higher densities.

Details: GGPNC Planning/Zoning and Historic Preservation Committee meeting. Wednesday, March 29th at 7:00 P.M. Citibank building on Hillhurst.  ¶ 12:37 PM (0) comments
The Greater Griffith Park Neighborhood Council convenes it's monthly board meeting tomorrow night, and those interested in the controversial Griffith Park Master Plan may want to pencil the confab in (if indeed, you can "pencil in" appointments on your Blackberry), as the Parks, River and Open Space Committee will deliver an update on the Griffith Park Master Plan Working Group's revisions to the plan.

Also on the very full agenda:

- a report on developments in the fight to save the Derby
- an update on the Ennis House restoration efforts
- a discussion of the L.A. River Master Plan
- an LAPD Northeast Division senior officer report on crime 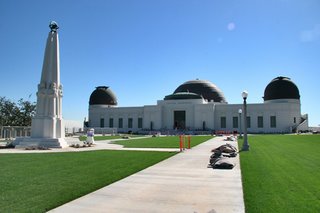 The Griffith Observatory website has updated their photo section with some great views of the nearly complete renovation project.

The exterior work on the Observatory looks to be all but done, and I have to say that the stalwart old structure has never looked better.

Click on over for pics of the Leonard Nimoy Event Horizon Theater, and of the greenest lawn the Observatory has ever had - and ever will have, as the coming visiting hordes (including yours truly) will surely trample it into a brown, muddy mess.

Yuca's will be having a photo day tomorrow to commemorate their 30th year of serving excellent (and reasonably priced) carnitas to the masses.

If you want to brave the rain to join in the festivities, here are the details -

Again with the rain!

Ah, but thanks to the power of YouTube, we can head out to a perpetually sunny Malibu for a hike.  ¶ 11:22 AM (0) comments

The Cultural Heritage Commission has recommended that the Derby be declared a Historic-Cultural Monument.

The war's not over yet, however: the motion nows heads to the L.A. City Council's Planning and Land Use Committee for their consideration.

To learn how you can help bring about total victory, visit Save the Derby for easy, effective ways to take action online.  ¶ 9:57 AM (0) comments
3.16.2006
Buried at the bottom of this Metro press release about the grand opening of Highland Park's new farmer's market is a handy index of L.A. markets reachable by Metro rail (would that there was a Ventura Boulevard line with a stop at the Studio City market). Don't know how easy it is for other areas, but I can vouch for the ease of taking the Red Line to the Hollywood market.

During these trips I've collected a great deal of anecdotal evidence (peeps with empty net bags getting on at Vermont, and women with handfuls of fresh flowers boarding at Vine) that suggests that I'm not the only one who likes to take the train down to Hollywood on Sundays.

Hell, even without the market it's a worthwhile trip: walk down the Boulevard to check out all the lofts under construction, grab a cup of coffee at Caffe Etc., then over to Amoeba, or down Vine to browse the freakiest Borders in L.A., or to the Arclight for a matinee (only $11!). Or, best yet, if you're rolling with fat pockets (and you're - ahem - a geek), head over to EB Games to drop some hard-earned cash on a game. Cap it off with a visit to Kabuki's sake bar, and you've had yourself a pretty full day in L.A.'s most urban environment - all without worrying about where to put your L.A. ball and chain (i.e., your car).  ¶ 11:52 AM (1) comments
3.15.2006 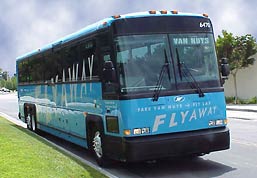 Frequent fliers, perk up your ears:

The city is launching FlyAway non-stop shuttle service from Union Station to LAX, with busses making the trip between L.A.'s past and current transportation hubs every 30 minutes. Fare is $3 each way for adults, and $2 for the kids.

How this works in practice remains to be seen, but I'm excited. A cab ride from Los Feliz to LAX can run to $60 before tip (yeah, it's usually on the company's dime, but still), and parking at the airport - well, we all know what a pleasant experience that can be.

And public transit? Heh! Currently, to get to LAX from Los Feliz using transit you walk (or take the DASH bus) to the Sunset/Vermont station, where you catch the Red Line to 7th/Metro, changing there to the Blue Line, riding to Imperial/Wilmington and transferring to the Green Line, disembarking at the Aviation/LAX station, and then, finally, catching a shuttle to LAX.

The FlyAway service (which also runs from Van Nuys to LAX) will offer travelers the best of both worlds: whisking along on the Red Line, below the clogged surface streets and freeways surrounding downtown, and then boarding a shuttle which can utilize the car-pool lanes on the 110 and 105 freeways.

On very humble suggestion: make permanent the promotional offer of free rides for patrons using Metro to get to Union Station. That could help Metro ridership, and keep more cars off the road.  ¶ 9:49 AM (2) comments
3.13.2006
Ladies and gentlemen, the MTA is proud to announce the official name of the "Subway to the Sea": the Purple Line!

Please, hold your applause until the end of the speech, or we'll never get through it. Thank you.

Now, we don't have any money for the Purple Line (yet, heh-heh), but we've got to start branding this thing as soon as possible. As you know, we believe that nine-tenths of the battle to get butts in the seats boils down to marketing. That may seem counterintuitive - there are those who say that better, more widespread service is the key to increased ridership - but look at the huge numbers our Gold Line push drummed up.

What an opening weekend, huh? Jam-packed trains! And that was for a poorly-planned line that has gone on to consistently underperform, quarter after quarter!

The Purple Line, on the other hand, is a line that Los Angeles actually needs. Half the battle is already won. To bring this thing all the way home, we need a cutesy handle for it, a marketing angle that we can work if - God forbid - the project starts hemorrhaging money like the unfortunately named Red Line (just for the record, we were opposed to that appellation).

That's where Purple comes in. It tests amazingly well amongst Angelenos - actually, fantastically well, for some reason. It will give the line a personality. It will create buzz.

And, it will look great on t-shirts.

The next battle in the war to save the Derby will occur this week, at a time and place of the Cultural Heritage Commission's choosing: March 16, 10 A.M., City Hall.

The Commission will be considering the Derby's application for City Landmark status, and Rebecca Goodman of the Save the Derby Coalition wants to turn out the troops for this critical public hearing. Packing the room with Derby supporters would send a clear message to the Commission: let the Derby stand.

All is not lost if you can't wiggle out of work on Thursday. You can still help by using Save the Derby's handy letter-generator to bombard key decision-makers with pro-Derby, anti-developer sentiments.

Words For My Enjoyment

The Passion of the Weiss